Instead of artificial numbers, I always prefer to let our actual track record and reputation speak for us. Smile Digital Health's technologies are already successfully deployed by some of the biggest provider and payer organizations, software companies, and government institutions around the world. We have proven our ability to scale as big as needed, over and over.

Benchmarks are ultimately data points, and more data is almost always better than less data. So in that spirit, I have done my best to present a benchmark that avoids the pitfalls above and to provide useful data points.

Building up on my assertion regarding unreliable indicators, I endeavored to set up a scenario that is both realistic and detailed enough that will still be helpful, even if it isn't exactly your scenario. Fortunately, 2021 was an interesting year at Smile, and we have lots of experience to draw on.

If you weren't paying attention, July 2021 was the target date that CMS-impacted US Healthcare Payers were mandated to begin providing consumer-facing APIs for data access. We helped quite a few organizations on that journey. So let's take that use case as our starting point.

In this benchmark we modeled a medium-sized payer, with one million patients to load along with a big pile of data for each one. We did the following:

In this benchmark we used a published build of Smile CDR. Smile CDR is a full featured healthcare data fabric with HL7 FHIR at its core.

Unlike many other options in this space, Smile is designed to AVOID vendor lock-in. It can be deployed using a variety of storage engines, in a variety of deployment models, in a cloud of your choosing or on your own premises.

Smile is powered by HAPI FHIR, the world's most popular open source implementation of the HL7 FHIR standard. Although it would require some additional tuning work to configure HAPI FHIR in a functional cluster, the results presented here should also be achievable with HAPI FHIR.

For this test, we deployed to the AWS cloud. While we generally recommend using a Kubernetes-based deployment in the real world, we used EC2 servers in order to precisely quantify the compute resources consumed in a way that should extrapolate easily to either deployment model.

Our test setup had the following specifications:

Smile CDR was configured using our recommended write performance settings. A complete copy of the Smile CDR configuration we used is available here (with credentials and server names removed, obviously).

These days the gold standard for FHIR test data is Synthea. While the data generated by Synthea certainly doesn't mirror exactly the patterns of data that a payer would have, we think it's a close enough representation to be valid.

Using Synthea, we initiated a run using a population size of 1,000,000. The following command was used:

This resulted in a final tally of:

Each of the steps in this benchmark was executed using a custom-written test harness. We did this in order to ensure reproducibility. The source code for the test can be found here: https://github.com/jamesagnew/fhir-server-performance-test-suite/ .

In going live on their Patient Access APIs, one of the more significant challenges most payer organizations faced was loading a huge historical set of data. Every organization is different, and this load took many forms. In some cases, we were transforming and loading columnar data extracts from enterprise data warehouses and converting it to FHIR as a part of the ingestion. Sometimes, we were receiving data in HL7 v2.x format and converting it to FHIR before storing it. Occasionally we were receiving already-converted data and storing it as-is. In some cases, we did not even store data, but instead built Hybrid Providers facades against existing (but non-FHIR) enterprise data services.

Smile has a number of tools that can help with all of these paradigms. A few major learnings include:

In order to keep complexity down we did not use Kafka for this test, but instead used FHIR transaction bundles exactly as they are produced by Synthea. We used a regular HTTP POST to invoke the transaction (as opposed to using something like FHIR Bulk Import) as we have found that most of our customers needed to take advantage of the processing rules that you can embed in a transaction (unlike a bulk import which is typically un-validated and can't contain logic such as conditional operations).

To support this task, we provisioned 6 EC2 servers in a Smile CDR cluster, using the specifications described above.

The load for all one million patients completed in 24:09:03 (24 hours, 9 minutes) using 100 upload threads distributed evenly across the 6-process cluster.

The following chart illustrates the load progress over the 24 hour span.

The following chart shows the average processing speed throughout the ingestion.

During this run, we observed that our servers averaged CPU usage slightly above 60% of their capacity. This is a good level for a sustained bulk operation such as a backload, and ensured that we were taking optimal advantage of the available database power. We did also observe a significant amount of garbage collector pressure in the Smile CDR JVMs, suggesting that adding additional RAM may have improved overall throughput.

During the run, the AWS Aurora database autoscaled to the configured maximum of 64 capacity units. At that level, it averaged 80% CPU utilization.

These two facts suggest that it should be possible to achieve higher performance (potentially significantly higher) with additional Smile CDR processing cores (we know of customers who have Smile CDR clusters 50x larger than the one we are using here) and a higher capacity unit cap on the Aurora DB (the maximum value for this cap is 512).

When persisted in the database, it consumed 2.423 TiB of database storage.

After the FHIR repository was fully populated, the next logical step was to simulate typical FHIR search queries. FHIR Search is the real workhorse of the FHIR specification and often accounts for the majority of activity on a production FHIR server. For this test, we focused on searches for ExplanationOfBenefit resources belonging to a specific patient, as well as supporting resources. There is nothing special about this query however, and the results here should extend to any typical search specified in an Implementation Guide such as the CARIN IG for Blue Button®, provided that appropriate search parameters have been enabled.

From this phase of the test onward, the cluster size was reduced from 6 EC2 servers to 4 EC2 servers, mirroring a technique many of our customers have used in order to reduce infrastructure costs. One of the many reasons we recommend Kubernetes based deployments where possible is that this scaling can happen automatically.

All data that was loaded in Step 1 was left in place for this step and subsequent steps.

This adds up to a total of 597,000 searches being performed for this test. The results are shown below.

Processor capacity in the 4-process cluster is shown below.

In this part we simulated several other FHIR operations being performed concurrently. We used the same ramping methodology as in part 2. This means that for each operation shown in this section, we performed it a total of 597,000 times.

For this test we performed a FHIR create.

In this test we performed a FHIR update.

For this test we performed a FHIR read.

We also ran several other common FHIR server scenarios, and achieved the following results at 50 concurrent users (which is a realistic number for the given scale of data and hardware size). 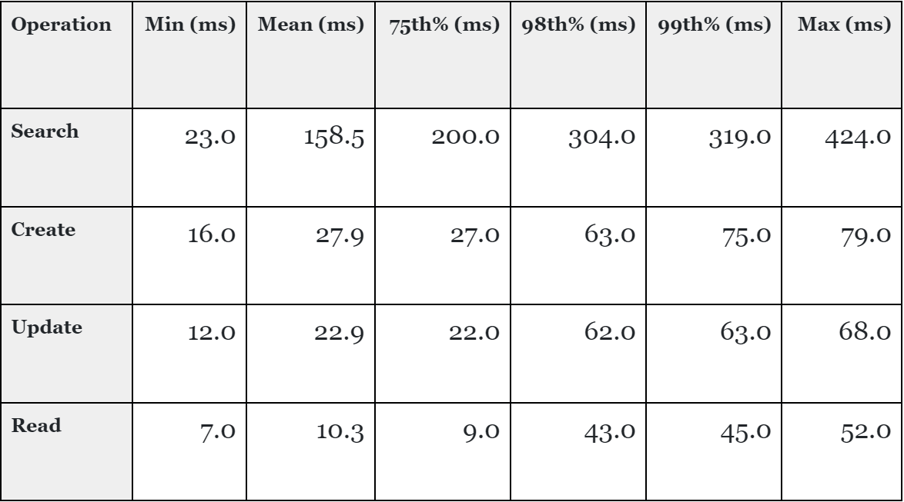 It's worth pointing out a few things about this benchmark:

We are only testing one platform combination here: Smile CDR + EC2 + Aurora RDS (Postgres). Smile supports many different database technologies and deployment models, each of which come with their own advantages and disadvantages. We plan on releasing additional benchmarks in the future using other stacks in order to provide guidance on what combinations work well.

We only tested one backload mechanism: As I mentioned at the outset, Channel Import (Kafka) has traditionally been our best performing option. ETL Import (CSV) has typically performed adequately but not spectacularly, with the tradeoff being that it is very easy to work with if your source data is tabular.

We optimized our search parameters: The FHIR specification contains a huge collection of "default" search parameters. Leaving them all enabled is almost never useful, and more importantly will almost always reduce performance to some degree and increase storage space.

Most importantly, we focused only on FHIR storage and retrieval here. While our HAPI FHIR engine has been around as long as any offering on the market (and in most cases, much longer), there are many other options out there too. Of course, you want good performance, but I suspect every major solution on the market today can be configured to achieve perfectly acceptable performance and scalability. My own opinion here is this: anyone who tries to use speed as their selling point is probably trying to skirt the fact that their system doesn't offer much else.