Let’s go back in history. It’s the late 1800s in a standard North American city and power generation and transmission across large geographic areas is now possible. This enables the rapid rise and bustle of city—living. In this time every building—commercial and residential—follows a different electrical code. This means that if you had to go out and buy an electrical device, you would have to know what electricity type would be compatible with your home. If you didn’t know and plugged an incompatible device, the risk of an adverse event (usually a shock or a fire) would increase. Additionally, every time you moved homes, you couldn’t pack up your existing devices but instead have to purchase a whole new set of compliant devices. Next move—rinse and repeat.

In the late 1890s the relationship between fire safety and electrical devices was relatively unformed. For example, at the 1893 World Columbian Expo in Chicago, a display of 100,000 incandescent light bulbs caught fire causing tremendous damage. This fair attracted hundreds of thousands of people who were witness to the blaze which claimed the life of 16 people, mostly fire—fighters. By the end of the Expo, the entire part of the city was left deserted, destroyed by the fire.

This was not an isolated incident, and adverse events like this caused a growing loss of lives, livelihoods, homes and urban infrastructure. Eventually, the need for installation standards for electrical equipment became too obvious to ignore. As a result, the electrical standard was agreed upon. With this small but important step, the fire, risk and safety standards also came into coherence.

It is important to stress that this decision was not about choosing the perfect standard, but rather about what this standard could enable. Once the standards came into play, the industry was able to shift innovation away from the plug, socket and wires in the walls to the consumer devices downstream, which added actual value to the users. This allowed for the industry to scale and innovation in electrical devices became possible. Costs and values, for the industry as a whole, including consumers, all device manufacturers, city planners and those responsible for urban safety began to take shape altering the industry forever. What took place over 100 years ago for electrical standards, is taking place now within healthcare as we move towards an open standard interoperability framework.

There is a strong parallel with electrical standards and data exchange interoperability standards. They match up to some degree in form and function. The flow of a signal or power between a wall socket and plug lends itself to the flow of data through APIs.

Healthcare providers have to move data between disconnected IT systems built with proprietary data models. In this legacy marketplace, patients’ information sits trapped inside the data silos controlled by providers and payers. These create massive time and cost inefficiencies, increase burden in clinical workflow and limit relevant patient data flow which impacts quality and timeliness of care. This makes healthcare the only industry where the front—end consumer (the patient) has to buy a service without knowing what the options, outcomes, cost, quality and pathway may be.

There is also a lack of situational awareness for providers, especially of high—risk patients like those living with complex chronic conditions (which are on the rise), or when the risk level changes. Patient historical data is often incomplete, missing, or impossible to obtain if the patient is unable to communicate. Also when multiple and repeat tests are ordered the result is volumes of duplicated data along with delays and frustration for patients. Today, data that drives quality management and risk decisions comes from healthcare billing cycles. These cycles come about eight weeks after admission.

Not everyone has eight weeks though.

For some, a two—month delay in diagnosis can be the difference between life and death. It would be the equivalent of finding out about a plane crash, eight weeks after the event and then starting to investigate what went wrong and trying to find survivors.

So what can we do to ensure the different systems talk to one another and communicate in a timely fashion? If we were able to agree on an electrical standard, can we do the same for healthcare data exchange?

FHIR®, Walk with Me

Fortunately, such a standard already exists and its adoption is growing.

HL7® FHIR® (Fast Healthcare Interoperability Resources) defines how healthcare information is exchanged between different IT systems, regardless of how it is stored. It enables interoperability, integration and innovation. It allows clinical, research and administrative data to be available securely to those who have the right to access it—including patients themselves.

There’s also a push from the regulatory bodies mandating the use of FHIR. A new wave of ONC and CMS mandates are shaping the industry requirements to regulate patient access to data and streamline longitudinal data exchange across disparate stakeholders in near—real—time.

FHIR standards combined with contemporary system architecture like a data fabric serves as a backbone for discovery; it unifies disparate data, regardless of format, location or structure and allows for exploration queries in the collective data sets.

A data fabric is an emerging data management architecture designed for attaining flexible, reusable and augmented data management (i.e., better semantics, integration and organization of data). Data fabrics allow for a knowledge layer that has relations of different types of data to one another and add services to enrich that knowledge layer so it’s easier for health apps to consume and interpret data. They can be woven into and wrap around existing EHRs, ingesting and cleaning up the volume of data available, making it ready to stream as appropriate.

The investment in a FHIR data fabric is not a ‘rip and replace’ data management model. Rather, existing systems passively participate in the fabric by feeding it relevant data. Eventually, the fabric enriches, matures and augments continuous analysis. This drives sustained ROI for the healthcare system, making the shift to data—driven patient—centric care easier to implement, scale and evolve – still a rarity in health technology.

Adopting a FHIR standard is the first step in unlocking the data fabric potential. Yet, for many organizations, it's not something they think of when they search for a FHIR vendor. But with that small step on the health IT front, an organization is on the verge of a giant leap for healthcare interoperability.

The question then becomes, what is the cost of this investment?

HAPI FHIR is free of charge. It is intentionally an open source standard and the implementation toolkits can be downloaded for free. At Smile we believe that the future of healthcare requires that we all share information transparently and meaningfully using a consistent standard; that standard being HL7 FHIR.

The investment in an enterprise platform allows for additional feature sets including, but not limited to: storage and security, integration with identity, support team to help with deployments and evolutions to changing legislations, maturing capabilities with data platform integrations with application plugs—ins, to name a few.

The value of fully developed enterprise implementation enables technology infrastructure to provide relevant and contextual information when it is required and supports better care coordination.

The early years of the 20th century were marked with remarkably high health and safety risks on the job, across many industries. In 1913, the Bureau of Labor Statistics recorded a rate of 61 deaths per 100,000 workers arising from a confluence of mechanical, process—based and electrical points of failure in workflow.

In the decades that followed, industries like shipping and aviation were also able to expand without compromising on safety as new implementation standards continually evolved. The rate of innovation also accelerated greatly. In 1925, only half the homes in America had electrical power for simple devices. A mere 35 years later, all homes had electricity and power generation and consumption expanded to include home air—conditioners, something that was impossibile a decade prior.

Additionally, prior to a unified electrical standard, innovation existed ‘behind the walls’ within the details of electrical transmissions. Once a standard household and commercial plug came to be, innovation moved into the home with much greater interaction and user experience with the end user.

We’ve come a long way from the electrical wild west of the late 1800s to where we are now. Today, no one wonders whether their household device will be compatible with the electrical outlet available at home or office. What we take for granted—innovation and safety in electrical standards—started with the development of a uniform electrical code in 1897.

As with most standards, it sometimes takes a tragedy to enforce change. The largest cost resulting from unsafe conditions are lives lost. The creation of and alignment to standards across various industries, has allowed for advancements in technologies to predict and prevent accidents and injuries over the past 125 years. New, safer evolving standards not only reduce risks, but also enable innovative infrastructure and can anticipate future needs.

With the growing adoption of the FHIR standard for data exchange in healthcare we are at the threshold of enabling innovation and safety in this industry. We are no longer surprised to have access to our complete health data in near—real time, we expect it. And because of that, we can’t accept the status quo in healthcare. We want to see changes in healthcare delivery that translate into healthier populations. We want an improved quality of life for ourselves and our communities at large.

For us, building towards a healthcare standard that enables that future, is our next step.
What is yours? 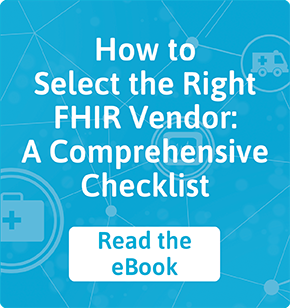