As a healthcare institution, you have information and services your patients and practitioners need to access. Fortunately, there are plenty of innovative healthcare applications that can help.

Thousands of these apps already exist, and many can be downloaded by end users with a few taps or clicks.

Unfortunately, getting them to actually work with your existing back-end systems isn’t so easy. Apps come with proprietary databases, data models, and interfaces. Due to this lack of standardization, each new app you deploy immediately becomes a legacy product that your IT team must devote resources to maintaining.

Want to integrate the data from two applications? That’ll need a custom integration.

What if an app becomes obsolete or stops being maintained and must be mothballed? Say goodbye to the underlying data store, because it just got deleted along with the app. 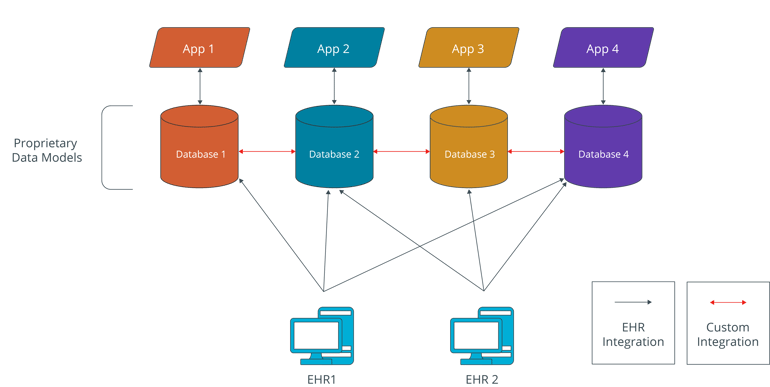 This also leaves you with silos of data throughout your organization, each connected to your main data stores with individual integrations. It’s a state of affairs that’s neither cost effective nor scalable, and one that doesn’t just create headaches for your development team. Siloed app data also prevents you from offering a coherent experience to your patients and practitioners across different touchpoints.

It’s tempting to see this as an EHR problem. But ripping and replacing your EHR, the (very expensive) heart of your system, simply isn’t an option for most organizations. There’s too much invested in it, and you don’t want to lose the benefits of your EHR that made you choose it in the first place.

What if there was a way to combine the stability and consistency of the core EHR with the flexibility and customizability of smaller satellite apps?

A Matter of Standards

SMART on FHIR is a set of open specifications to integrate apps with EHRs and other healthcare IT systems.

At first glance that may not sound revolutionary, but since SMART on FHIR apps allow for a variety of use cases to exist on the same infrastructure and the same data model (FHIR), you can build all your apps against a common data backend.

So what do these two standards actually do?

SMART on FHIR protects user privacy while still making their data accessible and usable by allowing for granular permissions and audit. This ensures the app has to ask for explicit permission from the user to access each different type of data—in conformance with industry best practices such as privacy by design.

Industry support is essential because ultimately it's up to the EHR vendors to implement the standards, a process which often leaves room for deviation. Fortunately, leading technology vendors and provider organizations have stepped up to form the Argonaut Project, an industry-led group that works to accelerate the use of open standards like FHIR through the creation of implementation guides.

In the US, this has culminated in the creation of the US Core Implementation Guide, a profile which constrains the scope of FHIR to actually be shareable by setting conformance requirements.

This means SMART on FHIR is more than just another standard. It’s a mature set of guidelines with well-established “rules of the road” which have been agreed upon not just by standards bodies like HL7, but by major industry players. It’s this kind of coordination that can transform interoperability from a buzzword to an achievable goal.

Smile IS is an application we built for managing complex occupational health workflows in real-time. It also captures and stores longitudinal medical data that is collected during these assessments while providing tracking data to support management decision making.

This system is designed to be used by different user types with different roles and permissions, so only certain categories of users (like clinicians) can view patient medical data to ensure privacy for sensitive information.

Since Smile IS is powered by Smile’s FHIR-based clinical data repository, it can easily integrate with EHRs. Information entered into the application interface will be stored as FHIR resources in Smile CDR. From there it can be accessed by other SMART on FHIR applications or EHRs and used for analytics, either in the cloud or on-premises.

Leveraging a FHIR-based clinical data repository as your standards-based data backend for all your SMART apps can significantly reduce the time to deployment and associated costs for all your healthcare apps.

Every new data store shouldn’t need a custom integration to be able to share data.

So stop burdening your IT department with the need to support different data models and legacy products, and don't lock yourself into one monolithic system and pray it meets your needs with time.

Instead, switch to SMART on FHIR with a consolidated FHIR clinical data repository to one data store with unlimited user interfaces, and get ready to: 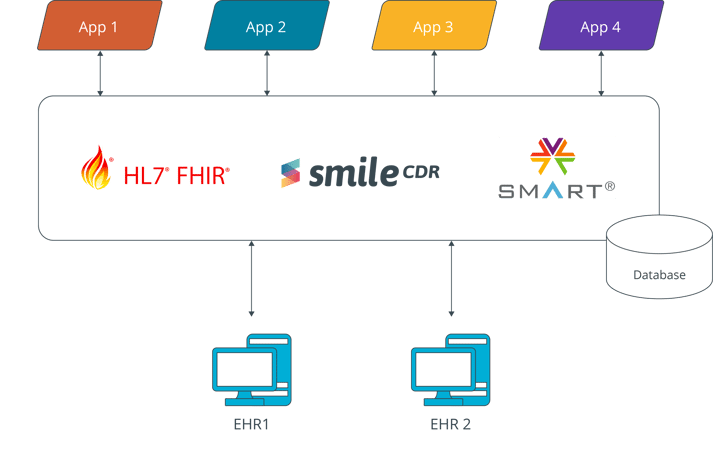 How does Smile CDR help with SMART on FHIR Implementations?

Smile CDR is a platform designed for secure, flexible access and storage of any type of health data an organization needs.

Smile’s FHIR-based CDR has a built-in OAuth2/OpenID Connect server that makes it easy to start leveraging the diverse ecosystem of SMART applications. Smile CDR is designed to receive feeds from a wide variety of health systems and store the information in a central repository that is consumable by all your SMART applications via a single authentication protocol.

As a result, patients and healthcare practitioners can access a library of substitutable apps to improve clinical care, research, and public health, all of which can run against the same data store for a more consistent experience that your patients and clinicians will appreciate.

We also have authorization, audit, compliance monitoring tools, and security integration built-in. It’s privacy by design so your users—patients and providers alike—can access their data in a secure and compliant manner.

While other vendors only provide a subset of the FHIR specification as data, Smile CDR makes the entire specification available, giving you greater flexibility. Every single FHIR resource is included out of the box. PAC uses SMART on FHIR to aggregate data from multiple healthcare applications and their underlying repositories. With PAC, patients can access all their health information with one platform and one login.

When patients log in, Smile CDR uses its built-in OAuth2/OpenID Connect server based on the SMART on FHIR model to authenticate and uniquely identify patients.Once authenticated, PAC provides a gateway that is centred around that patient.

Best of all, you don’t have to choose between Smile CDR and your existing implementation. Smile CDR is designed to augment other IT systems so you’re not bound to a single solution. You can keep using your existing systems for what they do well while using Smile CDR to fill in their capability gaps.

Smile is built on the HAPI FHIR library, the reference implementation of FHIR in Java. As a solution built around open source standards, there is no risk of vendor lock in. Your data belongs to you, and with Smile CDR you always have full access to your data, even if you decide to move to a different product, or as you add more SMART applications.

Speaking of applications, Smile CDR is launching its own SMART on FHIR app gallery, with apps we’ve built alongside those developed by our fantastic partners.

As a Smile CDR customer, you can easily access a growing ecosystem of innovative apps that integrate seamlessly with other SMART apps.

Do any of your clinicians see opportunities for new innovative applications? Develop your apps and leverage Smile’s ecosystem as part of your go-to-market plan, turning your workforce’s creative juices into revenue drivers.

Every clinician is a budding entrepreneur, and Smile CDR’s app gallery means they can join a community of developers looking to app enable the future of health care.

So get in touch today and see how you can leverage Smile CDR for your SMART on FHIR implementations to break free from legacy applications and siloed data stores.